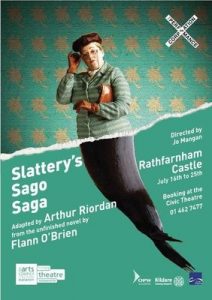 Slattery’s Sago Saga is adapted for the stage by Arthur Riordan from the unfinished novel by Flann O’Brien. Riordan absorbs the book’s problematic status into the body of his play through a series of meta-theatrical devices – “wheels within wheels within wheels” – which make a playful riddle out of the necessary exposition and original inconsistencies in the plot.

O’Brien’s book is set in 1960s Ireland, a place of political corruption, social inequality, and exploitative tourist legend: so far so relevant to contemporary Ireland’s woes. The absurd plot revolves around a Scotswoman’s attempt to eradicate the potato from the Irish soil, replacing it with Sago: a glutinous creamed substance sourced from the Sago tree. A variety of challenges stand in her way: namely greedy property developers and the entire leprechaun race. As plots of all kinds begin to unravel, the nature of the quest is redrawn, and it is at this point that Riordan reaches beyond O’Brien to put his own vivid stamp upon the material.

The first scene unfolds in the courtyard of Rathfarnham Castle, establishing a promenade structure that is neither necessary to the production nor followed through.
It also makes the 100-minute running time seem longer than it otherwise would. The rest of the play unfolds with the slick pace of a sitcom in the fabulous front drawing room of Rathfarnham Castle, whose distressed walls and crumbling plasterwork perfectly set the scene for the decaying Sellaway Castle.
Ciaran Bagnall’s superimposed design enhances the sense of dereliction with wooden panelled walls, which provide a variety of secret passages through the room, echoing the maze-like quality of the narrative.

The ensemble thrusts some fantastic comic performances together. Louis Lovett in particular manages to bring a new complexion to each of the four characters he embodies through subtle shifts in the high-colour of his cheeks and distinct physicalities.

Malcolm Adams and Darragh Kelly gleefully duet as the curiously familiar managers of the neighbouring estates. Riordan has most fun, however, creating his own alter ego in the shape of the gilded writing goddess, Imelda, played by Lisa Lambe.